The in's and out's of a restaurant

Marie-Antoine Carême has been considered the first ‘celebrity’ chef.  He was also known as the “king of cooks and cook of kings” (Kelly 2003: 225).  Along his maturation into the culinary world, his cooking and creativity helped to develop haute cuisine.  Haute cuisine or Grande cuisine is the “rich, intricate and elaborate cuisine of the 18th and 19th century French aristocracy and upper classes.  It is based on the rational identification, development and adoption of strict culinary principles.  By emphasizing the how and why of cooking, Grande cuisine was the first to distinguish itself from regional cuisines” (Labensky et al 2007:  5).  Carême followed strict principles in creating a genealogy of sauces which he categorized into béchamel, velouté, espagnole, and allemande.  In the simplest form they are thickened milk, thickened stock, thickened dark stock with tomato, and egg/acid emulsion like Hollandaise (Kelly 2003:  201).  These rules are evident and discussed in his five volume encyclopedia on cookery called L’Art de la cuisine which is basically a ‘how-to’ book on haute cuisine.  How did Marie-Antoine Carême become this great chef and create a new cuisine for the world? 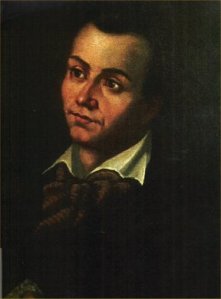 Marie-Antoine Carême was born in Paris, France on June 8, 1784 to the poorest of parents.  He was named after the infamous Queen of France which he would become known as Antonin for the rest of his life.  Carême was part of a large family that might have ranged from eighteen to twenty-five children of Marie Jeanne Pascal and Jean Gilbert Carême.  Many of his early records were destroyed in 1871 from the Franco-Prussian war so that is why there is such a large range of siblings.  There are many stories of Antonin’s departure from his family.  The basis of his story is that Carême was abandoned on the streets of Paris and so to be fortunately picked up by a local cook.  Was this fate or a lucky circumstance that placed one of the future great chefs of the world in the hands of cook?  Whether it was fate or a lucky happenstance that landed Carême into the household of a chef, this new life facilitated his future into the exciting culinary world.  Antonin lived and worked with his ‘new’ family for six years until he was the age of fifteen.  He worked to earn his keep in the new household as lowly kitchen-boy in a chophouse that was where the cook who took him in was employed.  The work in the chophouse was basically the bottom of the Paris food chain while the top or most prestigious was the confectioners or pâtissiers.  This would add another chapter in Carême’s story of becoming a great chef to the world.

At the age of fifteen, Marie-Antonin Carême started his journey into the world of pastry.  Carême began his apprenticeship with Sylvain Bailly who was a pâtissier in Paris on the rue Vivienne (Kelly 2003:  35).  This was a very fashionable section of Paris and in view for many locals that would pass the windows of this patisserie.  All this work in this shop may have started Antonin’s health demise.  He worked in conditions that were very unhealthy because that was the design of the day.  The kitchens existed below the house in the late 18th century and some even lived below the street level.  Though his work days were long, hot and foul smelling, Carême would spend his afternoons studying and reading at the Bibliothèque Nationale where he would research ancient and foreign foods.  Along with studying foods from around the world, his other passion was architecture which would influence his pastry centerpieces or as they were named extraordinaires.

While working at Bailly’s patisserie, one of its patrons of Carême’s windows was another gourmand named Charles Maurice de Talleyrand.  These public displays of his works would have a big influence on chef Carême’s culinary life.  Talleyrand was a significant French diplomat which he served from Louis XVI to Napoleon I and other leaders of France.  Carême partnered and cooked for Talleyrand for twelve years.  Talleyrand did not visit Bailly’s patisserie, but Carême’s talent was noticed by Talleyrand’s maitre d’ named Boucher.  Boucher persuaded Carême to leave his position at Bailly’s to take a post with Gendron.  Antonin was not of legal age when he joined Gendron, but he worked out a deal that he could do some free-lance work.  Most of these special jobs came from Talleyrand.  These two men had much in common such as both were abandoned by their parents.  Their friendship would last for more than thirty years (Kelly 2003:  49).  In Talleyrand’s employ, Carême mainly made his extraordinaires, but he gained experience in both banquet cooking along with his confectionery skills.  As time went on, Talleyrand introduced Carême to many of his influential friends.  Through these meetings, Carême cooked for Napoleon’s sisters, and by 1803 and with the money he earned from his sugared centerpieces, Carême opened his own patisserie.  At his own place, Carême could create new desserts.  This was where Antonin started to pipe meringue through an icing bag which nobody did before.  Meringue was formed by using two spoons to get the shape that you want.  He ran that business until 1815 or 1816, but it remained an establishment, in name, until 1863.

Antonin Carême’s career was gaining notoriety among the powerful and with the nouveau riche.  And with Talleyrand’s connection to Napoleon, Carême got to make the food preparations for his wedding banquet along with designing and making the cake.  After his time creating for Napoleon, Carême began his connection to the Tsar of Russia, Alexander I who was the grandson of Catherine the Great.  A few years later Carême worked for the crowned Prince of Great Britain who later became George IV.  With all these influential people that Carême worked for, he got to travel to many different countries.  He worked and visited countries and cities such as Great Britain, Russia, and Vienna, Austria.

Marie-Antonin Carême contributed many ideas, dishes, and techniques to the culinary world.  One of his main contributions was to the chef’s uniform.  Carême updated the uniform and introduced a new style of hat worn by chefs.  This hat is called the toque.  This form of hat is still worn by chefs today.  Carême was the first chef or person to create categories for the sauces in the culinary milieu.  These became the four mother or leading sauces which are mentioned above in this paper.  He also helped to create a new cuisine that branched away from local or regional cuisine, and it was name haute cuisine.  Influenced by what Carême witnessed in Russia, he changed his service of meals from service à la française with service à la russe.  This modernized the way people served food from all at once on the table to bring out each dish according to the menu.  Carême was also credited with “introducing cream as alternative to vinegar in Russian sauces” (Kelly 2003:  167).  Carême not only had influence on techniques and dishes, he had some influence on future chefs such as Auguste Escoffier.  Escoffier took Carême’s haute cuisine and modernized and simplified it along with adding another leading sauce to the list.

During his last days, Carême wrote in total five books on cookery and desserts.  Most doctors said that he had intestinal tuberculosis, but the main reason Carême was dying was because of his life in the kitchen.  Antonin endured with a low-level carbon-monoxide poisoning from his days in a charcoal smoked filled kitchens that had no ventilation system.  On January 12, 1833 Marie-Antonin Carême suffered a stroke and passed away just a few months from fifty years of age.

By working at Webster’s Prime in Kalamazoo and in the culinary world, I believe that it is very important to learn the history of the kitchen.  We as chefs can learn from the past to move our career and field to new levels of the art of cookery.  Today’s kitchen is still influenced by Carême by the uniform we wear and the sauces we make, plus the way we serve our menu in course instead of all at once.  I will leave this blog with a quote from Carême to all chefs, future chefs, and to everyone:

“Advice to young chefs:  young people who love your art; have courage, perseverance…always hope…don’t count on anyone, be sure of yourself, of your talent and your probity and all will be well.”